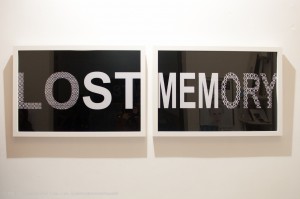 The two writing LOST and MEMORY have been realized during the first step of the project in the rural village of Abetenim (Ghana), using two traditional Ashanti symbols. The writing LOST is composed by DWENNIMMEN, symbol of strength and humility. The symbol emphasize the importance of humility in every aspect of the life in order to learn and acquire knowledge. The symbol discourages the arrogance to achieve its purpose. The writing MEMORY is composed by NKONSONKONSON, symbol of relationship that encourages the veneration of ancestors, and emphasizes the concept of strength in the unity and interdependence on each other. The symbol embodies the concept of unity and human relation.

The two writing are accompanied by two videos, the first one shows a series of interviews to the oldest people of the village, talking about “taboo” and particularly about the taboo concerning the Man and the Nature, and a second video that shows an interview to a neuroscience expert talking about collective memory.