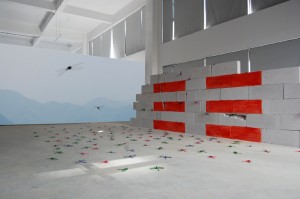 I’m because you are is a site installation realised during the fifth step in Sunhoo Industrial Innovation Design Park (Fuyang, Hangzhou, China). Fuyang has a water and mountain landscapes and it is national model of envionmental protection. Despite that, the Chinese economic development is leading to a dramatic boom in real estate business with entire agricultural areas converted into residential and industrial areas. Since de implementation of opening and reform policy, Fuyang has had a rapid development. Now China’s Racket China’s White Paper Production and China’s Cable Industrial Park are all established here. At the same time in no other cultural tradition, Nature has played a more important role in the arts than in that of China. The natural world has long been conceived in Chinese thought as a self-generating, complex arrangement of elements that are continuously changing and interacting. According to Daoist beliefs, man is a crucial component of the natural world and is advised to follow the flow of nature’s rhythms. Inspired by the stark contrast between traditional value of nature and the contemporary economic growth it was created the site specific installation I’m because you are, composed by a wall with some bricks painted in red to form one of the eight I Ching’s trigrams: K’un(Earth). The I Ching is one of the oldest documents in the world, can be traced as far back as 3000 years in written from, and the Chinese claim that it was passed down as oral tradition for two thousand years before that. The trigram K’un symbolise a yielding mother figure. This trigram is also symbolc of the power to give shape and sustance to things, making thoughts and images visible. The earth that yelds the crops. On the walland on the floor around it, one hundred coloured dragonflies was placed, with a video projection on the wall with music by the sound artists and composer Alessandro Olla. The dragonfly is a creature of the water, and symbolizes illusion and changes. Due to the humid climate, in Fuyang and even more in the mountains it’s common to be sorrounded by thousands of dragonflies.