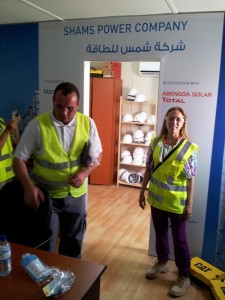 Facing the growth of global homologation and politics based on particularistic, nationalistic, ethnicistic issues, rediscovering and setting off the differences, and developing a locally-based logic, has become a primary need (Arenzano Manifesto’s Eleventh Thesis)

As the first major hydrocarbon-producing economy to take such a step, Abu Dhabi has established its leadership position by launching the Masdar Initiative, a global cooperative platform for the open engagement in the search for solutions to some of mankind’s most pressing issues: energy security, climate change and the development of human expertis in sustainability.

One of Masdar initiatives is Masdar City, the most ambitious sustainabe development in the world today. It is the world’s first zero carbon, zero waste city, powered entirely by renewable energy sources. Masdar City is also an open technological platform that provides its partner companies with the unprecedented opportunity to develop, test and validate their technologgy on a large scale and in a real environment. (www.masdarcity.ae)

Masdar has also appointed the bidding consortium of Total and Abengoa Solar as a partner to own, build and operate Shams 1, the world’s largest concentrated solar power plant and the first of its kind in the Middle East. Shams 1 will directly contribute towards Abu Dhabi’s target of achieving 7% renewable energy power generation capacity by the year 2020. The joint venture between Masdar (60%), Total (20%) and Abengoa Solar (20%) will develop, build, operate and maintain the plant which will be located in Madinat Zayed, approximately 120 kilometres southwest of Abu Dhabi. Shams 1 will be the largest concentrated solar power plant in the world, extending over an area of 2.5 km², with a capacity of approximately 100 MW.