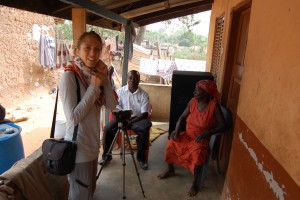 A unique destiny for a unique mankind: this is the world.

After having roamed around the continents for centuries, moving further away from his native land, the human being returns to Africa like an exhausted traveller; he returns to draw on knowledge – the same which led him to take his first steps; he returns to listen and to ask, to watch and to create again. Africa is the idea … the Africas are real and possible worlds.

As if returning to his own country from a long journey, man no longer recognises the idea that he had formed of it, or the memories he had been told. Poverty, disaster, violence, corruption and diseases are none other than the same ills which afflict the world in which he lives. And yet, there is something different in Africa: there are oasis and experimental workshops that haven’t ceased to advance since the beginning of time, and which represent the real age of life on Earth: the highest expression of the human faculty, the environment at its maximum degree of well-being and evolution. This is Africa (or an Africa) that revitalises the strength in the soul of the weary world traveller. This traveller is an artist, a humanist, a scientist, a person now who doesn’t want to go back without having documented the beauty and the power of this perfect ecosystem: that which for the world only represents a hoped for and very distant future, in this part of Africa is a present reality. And not only! Scattered around the continent there are other fertile spots, other oasis of thought that the traveller wants to visit and document. (Luca Bochicchio)

The video project in Abetenim Village was focus on memory and environment. Rebecca has realized a series of interviews to the oldest people of the village, asking them to tell me about “taboo” (ancient animist knowledge), and in particularly anout taboo concerning man and Nature. The final video shows the interviews made in Abetenim Village and an interview to a neuroscientist that explainshow memory works in short and long term. The artist was in touch with the Head of Department of African Culture at KNUST (University of Science and Technology) of Kumasi, for a more scintific knowledge about taboo.